Over 50 and Unemployed? Your Next Gig Will Not be Your Last. [Updated]

Your Next Gig Will Not be Your Last

You heard me right when I say your next gig or job will not be the last. It will likely be temporary; to assist you to get your bearings and get you back on your feet.

I wrote this post two years ago in August of 2018 and now with the COVID-19 pandemic upon us, this is more relevant than ever.

Over half of all unemployed older workers are now at risk of involuntary unemployment.

This is scary stuff.

A couple of years ago, I had this discussion with several individuals in the Career Pivot Online Community. They are over 50, and sometimes over 60, have been unemployed for over 6 months, and are still looking for that ideal job. They are starting to show what I refer to as unemployment fatigue.

The stress of being unemployed at this time of life is starting to get to them. This shows up in speech patterns, weight gain, sleep problems, and other signs of stress. They need to go back to work to re-establish patterns and give them a sense of self-worth.

This is especially prevalent among individuals who come from industries that are in a downward spiral or being affected by creative destruction. The COVID-19 pandemic is accelerating this trajectory. I wrote in a previous post that the aviation industry is being disrupted and will not recover for years.

I explain to them that their next gig or job will be sub-optimal. They just need to go back to work. 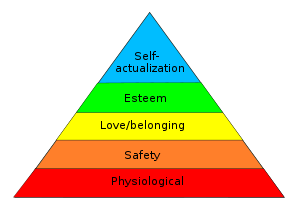 Maslow’s hierarchy of needs is a theory in psychology proposed by Abraham Maslow in his 1943 paper “A Theory of Human Motivation” in Psychological Review.[2] Maslow subsequently extended the idea to include his observations of humans’ innate curiosity. His theories parallel many other theories of human developmental psychology, some of which focus on describing the stages of growth in humans. Maslow used the terms “physiological”, “safety”, “belonging and love”, “esteem”, “self-actualization”, and “self-transcendence” to describe the pattern through which human motivations generally move. The goal of Maslow’s Theory is to attain the sixth level or stage: self-actualization needs.[3]

When you are unemployed without the financial assets that allow you to live without employment income, (i.e. you are able to retire or you have enough FU money to do what you want) then you need to have a job to meet the bottom two levels of the pyramid. You need an income to feel secure, put food on the table, and have a roof over your head.

If someone offers you a job in your area of expertise, you must take it. It may not be exactly what you want, but you will take it anyway.

I know, I know, many of you will push back and say, “But what if the right job shows up a couple of weeks or months in the future? You will have blown it!”

You will take the job, but you will not stop your job search.

Hey, what about loyalty to your employer?

Will your employer be loyal to you? NOPE!

Why should you be loyal to them?

Donna is a member of the Career Pivot membership community. She spent her entire career as a mechanical engineer across multiple industries, but when she got laid off, she determined she had had enough of the corporate world. She went back to school and, much to her surprise, she was able to get the state to pay for a Masters Degree in Public Health.

When she completed her degree in her late 50s she moved to the west coast to be close to her daughter and joined Food Corps.

Donna was placed in an elementary school where she taught about eating healthy foods. This was going into the classroom and the cafeteria to introduce children, who were largely from lower socioeconomic groups, about foods that were healthy and tasty.

She loved the work but then the COVID-19 Pandemic hit. Her daughter who works in the film industry, helped her start a YouTube channel. Donna found space at a community garden near her home and started producing videos for the kids. She was able to be interviewed on her local NPR station about what she was doing.  Unfortunately all this came to an end in June, but nevertheless she was still grateful for the number of new skills she had developed during this experience.

Donna recently started as a contact tracer in a neighboring county. She has now completed her many weeks of training and now is getting the opportunity to see the warts of county government.

She is hopeful that this will lead to a better understanding of where and how she wants to position herself as it relates to public health. The contact tracer job allows her to work from home, stay healthy, work a fixed schedule, and have access to the state and county job boards.

Sarah had been unemployed for 18 months and was reinventing herself as a business analyst by attaining a BA certificate from the local community college.

She was courting a variety of staffing agencies looking for a contract business analysis position and she got a call from one of the agencies that had a temp position for a spreadsheet jockey. A local hospital chain had been acquired and they were moving the entire accounting function to another city. A large consulting firm was brought in to manage the project and they needed someone with good MS Excel skills to grind through the data. It was a grunt job from Sarah’s perspective.

Sarah took the job with my encouragement. Like with Larry, she put on her work clothes every day, went to work, worked with smart people and started to rebuild her self-esteem.

This was just her next gig. It was 5 months before she was offered a full-time contract business analyst position with a large technology company. I do not believe she would have gotten the job if she had not been working at the “grunt spreadsheet jockey” job. Her attitude improved, she presented herself with confidence, her basic needs in Maslow’s hierarchy of needs were being met.

Karen is a member of the Career Pivot membership community.  She was in the automotive advertising business for many years until the great recession hit and never completely recovered.

Karen has bounced around from job to job but has always been able to stay afloat financially due to her husband’s job and health insurance. He then lost his job and their health insurance in 2019. That is when Karen made a set of strategic decisions.

In 2019, she accepted a 30 hour a week temporary job running a program for freshman students. This was probably going to last 6-9 months but it was a stepping stone into getting a foot in the door at the university.

Then the COVID-19 Pandemic hit and much to her surprise they kept on till the end of the school year. Due to the fact that she was a university employee she could access the internal job board at the university.

She applied, interviewed, and was given an offer to be an administrator for one of the colleges at the university. All of this happened in the heat of the pandemic. She has been trained and onboarded to her new job remotely and has been told she will not return to campus full time until July of 2021.

Your Next Gig will not be the Last

Sometimes when you have been unemployed for an extended period of time, you need to take what is available to rebuild your self-confidence. This makes you a better candidate.

I know, I know, you do not want to take a step back. However, sometimes you need to ‘suck it up’ and take what is available.

The key message is: do not stop looking as it is not your last gig!