Watching the Response to the Pandemic from Mexico

Watching the Response to the Pandemic I want to take a moment and contrast the response to the pandemic by the state of Jalisco Mexico to my home state of Texas. Our planned trip back to Austin, Texas, which was originally planned for April was put on hold by the lockdown. Our next plan was to return in July which has been put on hold due to the explosion of cases of COVID-19.

The land border between the US and Mexico is technically closed except for essential travel. However, air flights are available for tourists but the flights are very limited. Besides I am not getting on a plane this year if I can avoid it.

If we drive back to Texas, as US citizens with Mexican resident visas, we should be able to cross the border and return. The current restriction at the US Mexican border expires July 21st but I expect it to be extended another 30 days.

I have been watching the COVID-19 dashboards created by the City of Austin.   Austin Mayor Steve Adler’s Facebook live session on the COVID-19 has become regular viewing. At the same time, I am checking the daily pandemic report from the Government of Jalisco called Radar Jalisco.

I am comparing Jalisco to Texas and NOT Mexico to the United States. This is due to the fact that in both countries ALL of the hard work is being done by state and local governments.

I previously recorded a podcast in late April 2020 called My Life in Mexico during the COVID-19 Pandemic [Podcast].

My wife and I live in Ajijic Mexico, which is one of the longest-standing expat communities in the world. Expats from all over the world have been coming here for over 65 years. If you are interested in why we live here you can follow our journey here.

As of 3 weeks ago, we had no cases of COVID-19 in Chapala. As I type this post we now have 33 cases reported in Chapala with a population of about 50 thousand people. There is not widespread testing so take these numbers with a “grain of salt”.

There were blockades between Guadalajara and Chapala since early April. Only people with valid business or were residents could return. Those blockades have been removed in the last week. Face masks/mouth covers which are called “cubrebocas” have been mandatory since sometime in April.

My wife and I feel much safer in Ajijic than we would in Austin as I type this post. The COVID-19 pandemic is changing how we view our little world here.

Example of the Jalisco Response to the Pandemic

The governor of Jalisco Enrique Alfaro Ramírez started opening up the economy on June 1, 2020. The process was very structured that required businesses to follow strict sanitary protocols. Those businesses that do not follow these protocols are shutdown. This includes the wearing of masks by employees and customers.

My wife and I made a trip into Guadalajara on July 1, 2020, to Costco and to the Andares Mall. My wife wanted to replenish some Lush products and she wanted to buy a pair of sandals from the Birkenstock store. Both stores are located in Andares Mall.

When we entered Costco in Guadalajara, everyone was wearing masks. Employees and customers and there were no exceptions. When we entered Costco you must step on a mat that is saturated with a mild bleach, your temperature is taken and you are given some hand sanitizer. I have heard of one story of an expat who tried to enter the Walmart in Ajijic without a mask and he was escorted out by the police.

Only one person per member card was allowed to enter the store. Different from past experiences before the pandemic there were no children or families. It was also QUIET. Mexico is a noisy place so this is quite a contrast.  The Mexican culture is very family oriented so not having children in the store was strange.

Costco had stickers on the floor telling people where to stand in check out.  It was very orderly.

Andares mall is very high end with many luxury brands on display. However, there is a Best Buy store and a MacStore which I do not consider to be luxury brands like Gucci and Coach. Apple does not have Apple Stores in Mexico and the MacStore is a licensed distributor.

When we entered the mall we stepped on a bleach mat, had out temperature taken, and given hand sanitizer.

First, we went to the Lush store. See the entrance below. 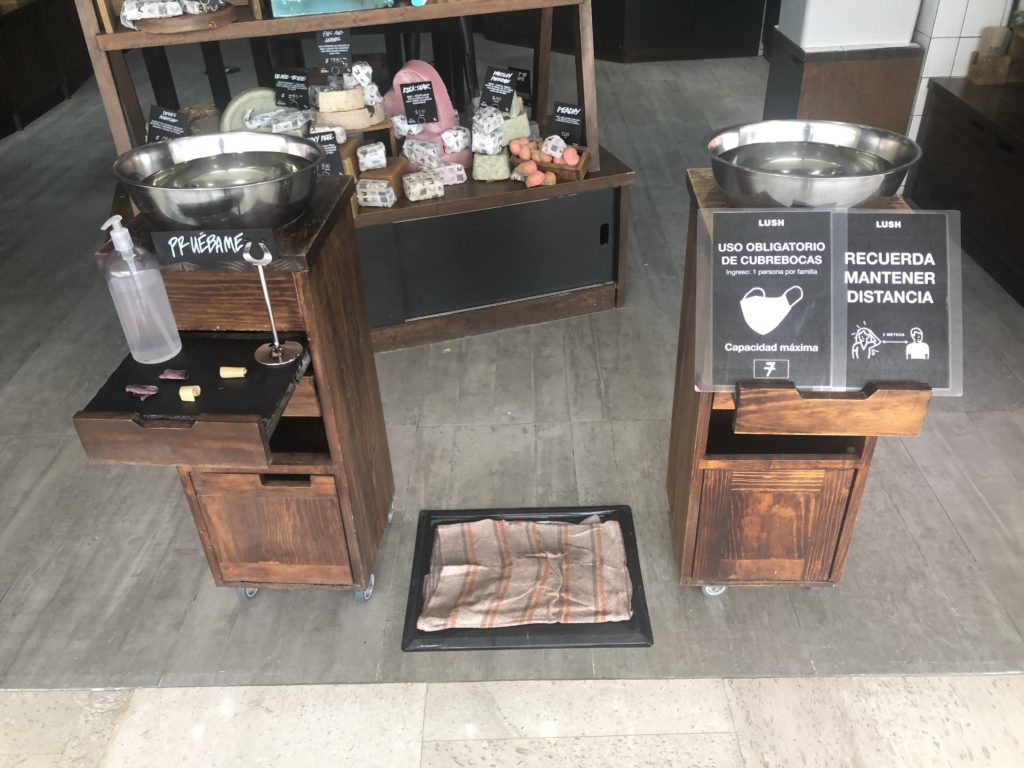 We encountered something similar at the Birkenstock store except there was a chain across the entrance and we were not permitted in until we stepped on the mat, had our temperature taken, and sanitized our hands.

On the front window, they displayed their Fase Cero or Phase Zero Sign.

Fase Cero or Phase Zero plan put forth by the Jalisco government is a step by step reactivation of the economy. After the process started COVID-19 cases started to rise and Governor Ramírez slowed the process of reopening but started calling it the phase of personal responsibility.

Not all businesses opened on June 1 but they gradually opened over several weeks as they got certified. The Governor gave great latitude to the local authorities to take action. The equivalent of Mayor of Chapala closed liquor stores for the much of April to discourage Guadalajarans from coming to the party. Yes, the Mexicans like to party and the month of April with Holy Week is a major time of celebration which almost always includes imbibing Tequila.

Governor of Texas Greg Abbott started reopening the Texas economy on April 17th. One of the major differences was he did not require masks and did not allow local officials to implement measures that were stricter than the rules dictated in his executive order.

I have been watching the mayors of every major city in Texas ask for more control and to impose mask ordinances. As cases have exploded in the last couple of weeks in Texas, the Governor has ordered bars closed, restaurants to reduce capacity, elective surgeries to be postponed in several major cities. The mayors and county officials have found a way to impose mask ordinances by requiring businesses to make masks mandatory within their businesses. This has been an acceptable workaround for Governor Abbott.

I see what is going on back in Texas and it scares me.

I watch Major Adler most evenings and what he is asking for is very similar to what Governor Ramírez is doing. I am very impressed that even as caseloads started to increase, the Jalisco Governor came out and said the economy was dying and it had to be restarted. He said it was our personal responsibility to wear masks, maintain proper social distance, and businesses to follow sanitary guidelines. They are pretty heavy-handed when businesses do not comply.

Is everyone wearing masks? Not really. Though many are.

Will we see a spike in cases like is happening in Texas? I do not think so but time will tell. At least here in Ajijic, most businesses are either outside or in very open environments. Plus, they are following the requirement sanitary protocols.

Businesses like the non-profit Lake Chapala Society, which has a large campus and supports the local expat community, has not opened its main campus nor any of their other properties. It is a rigorous process to get certified to reopen.

I see local and state officials looking at the data and adapting quickly. As I complete this post on July 2nd of 2020, Governor Ramírez just ordered movie cinemas and theatres closed after they were open only 2 days at 25% capacity. Parks and other publics that were allowed to reopen at the same time are still open.

What About the Rest of Mexico During the COVID-19 Pandemic

There is a very good Wikipedia page called COVID-19 pandemic in Mexico that is updated regularly. If you go to the section on Cases per 100,000 inhabitants you will find Jalisco is one of the best even though it is one of the largest states in the country by population.

Just like in the United States the pandemic’s aftermath is different based largely on timing and response by local officials. The worst-hit areas are Mexico City and the State of Mexico, which surrounds Mexico City.

These Are Scary Times

I started looking at all of this several months ago as we were planning a trip back to Austin. Then my wife’s father went into the hospital for the second time in 4 months. We feared that my wife might need to return to Texas for a funeral. This would mean driving back and going through Houston, where the ICU beds are almost full.

Unfortunately, the federal response to this pandemic in the United States and Mexico is tied to politics and not good public policy.

A lot can be learned from those the state and local officials who are learning to manage this situation on the fly.

I hope this gives you some insights into what is happening south of the border and how someone from the outside the country sees what is going on.

Much of Mexico is just as much of a mess as the many states in the US with exploding COVID-19 cases. However, here in Jalisco the state and local governments, though not perfect in their decisions have impressed me by making generally good decisions.

I will close with this thought – Mexicans generally do not do what their government tells them to do. What I am seeing here in Jalisco is far greater compliance with what needs to be done to walk the fine line of opening up the economy AND keeping people healthy.

Does this surprise you? Let me know in the comments below.